Gully Control Works: Gully erosion is the main erosion problem of the state which eats up about 3000 hectares of agricultural land annually. Gullies are the formation in the soil by the surface runoff water and thereby initiating sheet and rill erosion and finally the gullies resulting in accountable loss of top fertile soil by means of erosion. Gully control structures like spillways, check dams etc are constructed to stop further advancement of the gully heads and fingers and to improve the moisture regime in the command areas which results in increase in production from agricultural land.

River Training /River Bank Stabilization Works: The rivers/streams in Assam are meandering in nature and has caused severe river bank erosion problems in areas adjacent to banks of most of the rivers and tributaries. Due to heavy sedimentation in riverbeds, the problem is getting worse every year. Protection of river from bank erosion, stabilization of eroded river bank, reducing of meandering of river etc. are the main importance of this Department. Under this the Department constructs bamboo/brash wood/boulder spurs, boulder revetments with vegetative support, loop cutting works etc to tackle. this problem. 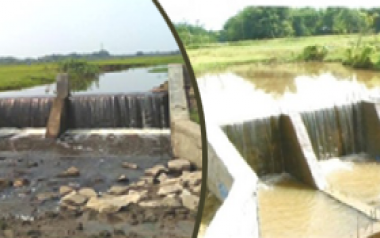